Posted by Brad Hessel · February 06, 2016 5:40 PM
Yesterday’s US Circuit Court decision invalidating two NC Congressional Districts is a modest step in the right direction, but much, much more remains to be done. The Federal court ruled that the boundaries drawn by the North Carolina General Assembly for the 1st and 12th US Congressional Districts following the 2010 census were racially gerrymandered and must be redrawn. Just a glance at the map is all it takes to see that the Republicans who drew the boundaries had something in mind other than clear, measurable criteria such as population equality, contiguity, unity of counties and cities, and compactness. Possibly the most surprising thing about the ruling is that the 4th, 9th, and 13th districts were not red-flagged as well.

These are sample blog posts. You can edit or delete them from Websites > [blog] > Posts & subpages. 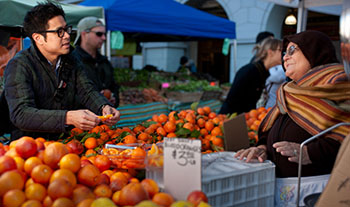 Our community has a great Farmer's Market every Sunday from 8 a.m. to 2 p.m. in the library parking lot. Fresh produce is sold by area farmers, like these tasty oranges sold by Mrs. Patel.

Communications Director John Woo is about to sample Mrs. Patel's oranges. He thought they were so delicious, he bought two bags to share with the volunteers in our campaign office.

Learn how to create a blog and some tips for keeping it updated.